Download Garena Free Fire, an excellent third-person Battle Royal. One of the most popular games for any action fan today in Android.

In the world of Battle Royale,before the arrival of PUBG or Fortnite, there was already a market share to fill and make appearances many theme games. One of them is  Garena  Free  Fire,standing out above others thanks to its low demand for hardware and small differential peculiarities of other better known titles.

Garena Free Fire is a Battle Royal in every sense of the word. Once again, we are placed on an island where we must survive by using our military knowledge and survival skills in a game of 50 people. The last one standing wins the game. 49 opponents to defeat, a no-easy task. Despite the enthusiasm of the vast majority in their first game (that’s with  bots,to get acquainted).

Free Fire is a game that looks more like PUBG than Fornite. We have a use of licensed weapons, so we find old ones known as the AKM, AM4, SKAR submachine guns, among others, pistols,  snipers,shotguns and more. We also have pieces of armor that give us some protection such as helmets or vests. It’s all very similar to PUBG.

But Free Fire has some elements that make it quite unique and allow you to have an experience at least different. To begin with, we fall off a plane on a skateboard, and although it could result in a minor detail and only cosmetics, it gives us an idea of the style of play ahead. A small map, only 50 players, is designed for faster, more casual games. Prioritise the fun over the suspense.

It also has certain RPG elements, such as  the health of our character is expressed numerically. That is, we will have a life bar with numbers and the damage that we achieve with the different weapons is also expressed in the same way.

So you can tell by far which weapon does the most damage on each occasion or at a different distance. It’s a pretty sensitive help for those who are used to that kind of damage tracking, as in RPGs.

Free Fire is allowed to play quite well, the system helps when it comes to aiming is quite accurate. Likewise, we have a visual aid, when we aim at a target and do not have it in sight of damage, we will have a blue visual pattern, while if it is in our damage area, it will turn red. That helps a lot to improve accuracy and be able to shoot with better damage options.

It also helps the accuracy of the weapons, quite well achieved. Aid may sound a little excessive, but in a way it seeks to compensate for how difficult it is to adapt a control for this type of game on a touch screen.

Includes items that modify the gameplay experience, such as radar drones to indicate the position of other players. Items absent in other titles.

Graphically Free Fire  is a compliment. We won’t find dazzling or detailed graphics, as these were sacrificed for proper performance. Not for nothing the game weighs just 50 MB from the store and about 300 MB in later download. The character designs are a little more casual and eye-catching compared to other games, giving it great personality.

However, many of the animations are very poor and unaccomplished, like our character when running or jumping, the scenarios quite limited in detail framing a very simple view in general.

Garena Free  Fire is a good  Battle  Royale,simple,  that although it does not contain the depth of other titles, is a good option for games that do not exceed 10 minutes on average. And of course, it’s free. 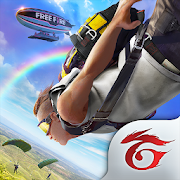